The news of Hushpuppi’s alleged arrest by Interpol in the UAE came as a shock to most Nigerians. But as the saying goes there is no honor amongst thieves. He is known for his flamboyant lifestyle and he doesn’t hesitate to show off on the gram. Hushpuppi was reportedly arrested by the Interpol for his involvement in the movement of COVID-19 relief funds meant for unemployed Americans.

Reacting to this via his Instagram page,  Samklef advised people who do not have a legit source of income to stay off social media. He told them not to end up in trouble while trying to prove a pint to people who would still mock them once they get caught. He wrote:  “If u know ur hustle no tight stay off social media don’t play yourself trying to prove a point to people…cause they will laff @ you when u go down! Be wise!” 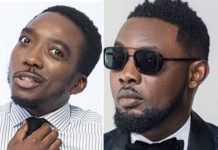