The permanent secretary of State House, Abuja, Jalal Arabi, on Tuesday, February 18, confirmed the death of Laetitia Naankang Dagan, the assistant director of Aso Rock who was killed by unknown gunmen in her apartment. Arabi, announcing the sad incident, revealed that Dagan was murdered around 11 pm on Monday, February 17, PM News reports.

Describing the death of the deceased as a painful loss both to her family and the entire State House, Arabi assured the public that the police will surely trace, arrest and prosecute the culprits behind this mindless act in no time.

In her statement, she said: “The Police will fish out the killers of Laetitia and the law will take its course.” She described Dagan as a dedicated and hardworking person who through her days as a worker in the House lived a good life.

Arabi, on behalf of the entire staff members of the State House, said: “We all share in your grief and pains, but be consoled by the fact that she lived a good life and contributed her best to the services of her nation.” Praying for the fortitude which with the bereaved family will bear the immense loss, the permanent secretary called on God to grant the departed soul peace and rest. 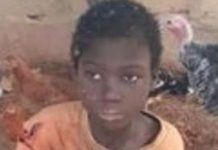